I really enjoy any chance to get can’t wait to get outdoors. Over spring break, I was lucky to spend my week exploring the Great Smoky Mountains. It was my first time being able to hike in the mountains, and I loved each and every view.

My girlfriend and I trekked off to multiple waterfalls that cut into the remote mountainsides. Every time we hiked or drove past one of the rivers, the clarity of the water blew my mind. You could always see the bottom of the river even when it was around six feet deep. Someday, I would love to return to trout fish in the rivers and brooks.

The pictures show two of the highlights of the trip. Our hike along the Appalachian Trail provided scenic mountain overlooks, and Spruce Flats Falls was at full effect from the recent rain. I had so much fun exploring a new part of the country, and I can’t wait for my next trip to mountains.

Senior year truly is flying by. I know I say it every blog post, but I can’t believe that it is almost March already!

With that being said, that means Spring Break (my last one ever!) is officially on the horizon. Only one more week of classes and then it is finally here! My friends and I wanted to do something bigger this year since it is our very last one.

We decided back in November that we were going to book a Royal Caribbean cruise to the Bahamas and Grand Cayman Islands! Our cruise leaves out of Miami on Monday, March 9th! It is a five-day cruise and there are 10 of us going together. I am rooming with two of my best friends, Lauren and Kelsey.

I can’t wait to spend some much needed time in the sun with my best friends. I am also excited for all the food that the cruise will offer! There is a buffet open 24/7 on every deck and we are also served a three course meal for dinner every night. There is also a casino, dance club, swimming pool and slide, as well as workout equipment on board!

It’s safe to say that we are going to go out with a bang. Spring Break can not get here soon enough!

Over our winter break, I went on a ski trip to Colorado with my best friend Hannah! I met Hannah in our first-year engineering classes, and we became close, bonding over our shared love for live music, social and political issues, and traveling. Last spring break, we went to Mexico together, and discovered we have similar traveling styles—we are both laid-back, love eating local food, and staying active, like riding bikes and scuba diving.

I knew that when Hannah invited me on this ski trip, that it would be another enjoyable experience. We were going to meet up with Hannah’s best friend from high school, Liz, who goes to college in Colorado.

We flew to Denver on a Thursday night and spent Friday exploring the city, eating at several different places and walking around to get a feel for the neighborhoods and street art. Friday night, Liz, Liz’s boyfriend Nick, and Liz’s boyfriend’s brother Luke, came to pick us up. After eating Vietnamese pho for dinner, we headed out to Breckenridge in their car.

While we were driving, we encountered a huge blizzard which shut down the roads! We got stuck in a snowbank while driving to our Airbnb; luckily, two very capable tow truck men came to rescue us, and we were fortunate to snag one of the last hotel rooms in town at 1 am. It wasn’t what we had planned for, but it was definitely memorable and a bonding experience for us all.

On Saturday, we went skiing at Breckenridge! I had only been skiing once before, in Ohio, and it was Hannah’s first time skiing ever. Liz and Nick proved to be fantastic hosts and guides, and they helped us grasp the fundamentals of the sport. They were super encouraging and helpful! Hannah and I both improved so much from the beginning of the day to the end of the day. 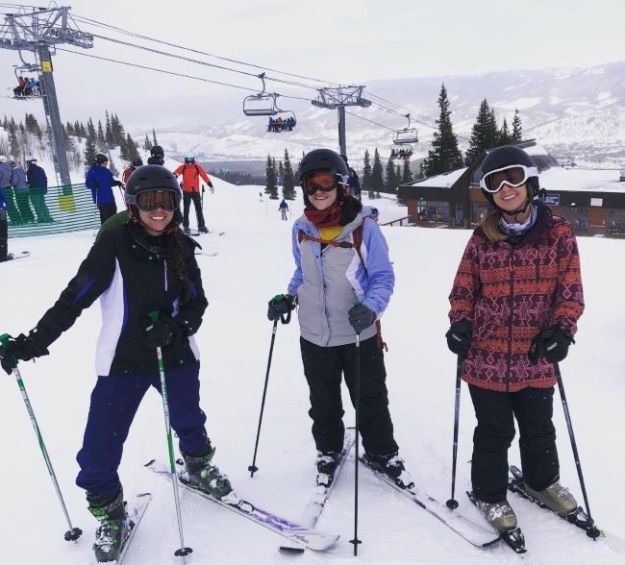 Skiing in Colorado was incredible—the mountains were enormous, the snow was so fresh, and the views were stunning and breathtaking. We finished our day skiing at a restaurant, where we attempted to replenish all the calories we had expended that day.

On Sunday, we took a bus back to the airport and headed back to Ohio. It was a short trip, but it was absolutely worth it. I look forward to returning to Colorado to ski again in the future, and I look forward to more fun trips with my best friend Hannah!

Over winter break, I journeyed to Las Vegas with my roommate and fellow ambassador, Lydia Seiter. The great thing when I do go on a trip somewhere is to explore different civil engineering masterpieces (at least in my opinion).

I recently finished my class on the structural design of concrete, so naturally, we had to go see Hoover Dam.

Lydia (who is a Chemical Engineer) and I walked around the dam, and I explained to her about how concrete is different than cement, the curing process of concrete, and how concrete is commonly reinforced by steel bars. 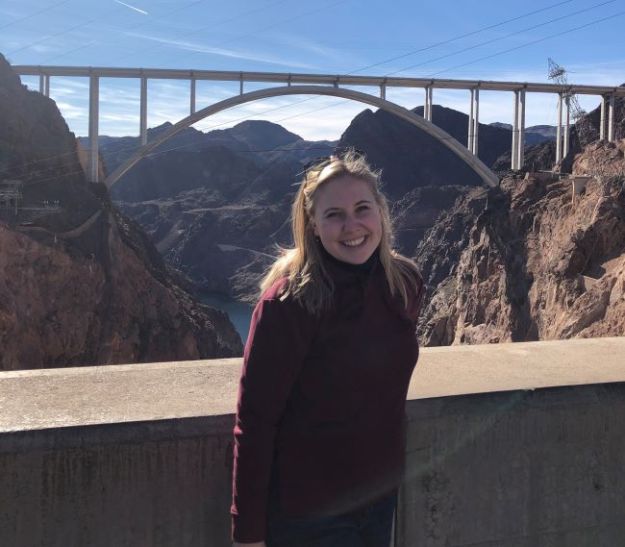 Civil engineering is everywhere you go. This is one of the beauties of my major because it’s fun understanding the “why” behind the buildings, roads, or other civil structures. Also, if you haven’t gone to Hoover Dam, I definitely
recommend checking it out.

Surrounding myself with ambitious, driven, successful, brilliant, and talented women engineers during the conference was inspiring. On Thursday, the keynote speaker, Carol Malnati of Medtronic, talked about the importance of mentorship and inspiration. She spoke about how when she felt discouraged or frustrated by her struggles and obstacles in the engineering world, she felt empowered by her young daughter, who depended on her, and for whom she wanted to set a positive example. It was wonderful to hear from a successful, executive woman, especially about a time that she felt weak but became resilient.

Additionally, on Wednesday, I had the opportunity to network at the career fair with companies in various industries, including automotive, energy, oil & gas, aerospace, consumer products, and materials science. I was incredibly impressed with the career fair and how welcoming and engaging the recruiters were.

On Friday, I had the opportunity to attend the keynote speaker Rachel Hutter, from Disney. Traditionally, I had never thought about Disney as a company that engineers work for, but it was exciting and surprising to have my mind changed about that! She gave career and life lessons from the Star Wars franchise, which was interesting and unexpected.

I also had the opportunity to attend the Collegiate Women’s Luncheon, where I met other women engineers from U.S. universities. There was also a beneficial Q&A session during the lunch, where women engineers from a variety of industries spoke about their experiences in the workforce. It was so helpful to hear what they had to say about graduate school, making career moves, trying new things, balancing work and life, and finding a best fit in their career.

After the conference wrapped up, I was also able to go to the beach and to explore Downtown Disney in Anaheim with fellow Ohio University Society of Women Engineers members before heading back to Athens, Ohio.

All in all, I was so grateful to have had the opportunity to represent Ohio University at the Society of Women Engineers conference, and to learn from the perspectives and experiences of professional women in engineering. I hope to continue to attend this conference in the future, as a professional member!

For the long weekend, a friend and I traveled to Buffalo, NY and Toronto, ON to see my favorite band, The Maine. I was unable to make the Cleveland show, so we decided to make a trip out of it! After the concerts, we stayed an extra day in Toronto to explore the city and do touristy activities like going up the CN tower and seeing Niagara Falls. 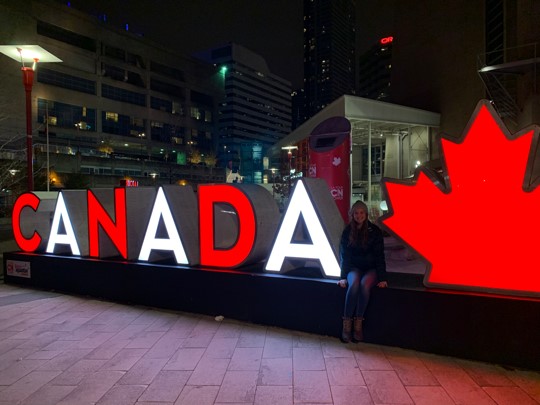 Before the concerts in Buffalo and Toronto, we got dressed up in our gold outfits (the tour had a gold theme) and took pictures in the photobooth the band had set up before the concert.

his tour is called ‘The Mirror’, so on-stage stood a mirror-like screen that displayed videos and lyrics throughout the concert. Everyone brought yellow flowers and threw them on stage during the last song, Flowers on The Grave. After the show, I also chatted with members of the band.

Toronto was my 30th The Maine show, and the concert in Buffalo marked the 9th state I’ve seen them in. It’s crazy to think that a band I found in middle school would remain such a big part of my life until college.

Even after all this time, going to their shows brings me the same amount of happiness and excitement. This band has allowed me to travel to places I never would’ve thought, have given me a sense of belonging, and have provided me with an escape from the stressful world of school.

Since this is my first blog post since the start of my senior year, I thought I would fill you all in on all of the exciting things I got to do and experience this past summer.

I’ll start by filling you in on my internship with ABB. This was my second rotation working at ABB’s Cleveland office. Last summer I was in a systems engineering position, and this summer I was in a proposals engineering role. I worked closely with customers, account managers, and many other people throughout the company to put together proposals for around 32 different projects. These proposals define the scope of work of each particular project as well as what equipment the customer will be receiving.

It was amazing to apply what I had learned last summer as well as my technical and writing skills to make a difference for a company. It even ended in a full time job offer for after graduation! I am so excited to continue my career at ABB and see where it takes me.

I also did a lot of travelling this summer—something that has always been very important to me. I traveled to Nashville, Pittsburgh, Columbus, Mammoth Cave in Kentucky, as well as Carolina Beach with my family and friends. I saw so many new places and got to have so many different experiences.

I am very grateful for the amazing final summer that I had as a student. On to the real world next summer!